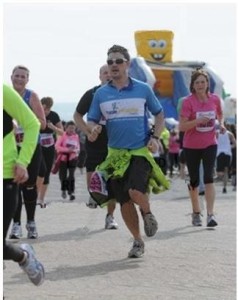 Our Director Ian (see left) is running the London Marathon in 2014. He’ll be raising money for the Cancer wards in Poole hospital. If anyone would like to make a donation for this amazing cause please follow the link: Marathon Madness

We wish Ian all the best with the training and the marathon. We’ll post some pictures of the day.

We are a Bournemouth Kitchen Company, proud to be raising money for local charity’s. in 2010 Hallmark Kitchen designs teamed up with Poole hospital, and since then the have help raise over £7500 for various wards at the hospital. We have accomplished some great personal goals too. In 2011 we have cycled from John O Groats, the very most northern tip of Scotland to Lands end, the most southerly  point in England. We think we’re the only Bournemouth Kitchen Company to cycle 1000 miles in the rain!

We also cycled from London to Paris in 2012. This was only 300 miles, but was made really difficult due to cycling mainly in the dark with serious sleep deprivation.

2013 we cycled from London to Brugge in Belgium. This was made particularly difficult because the temperature dropped to -2.

Keep checking out our news page to see what your local Bournemouth Kitchen Company is up to in 2014.

Hallmark Kitchen Designs are a local kitchen design, supply and installations company working in the Poole, Bournemouth, Christchurch and surrounding areas. We offer either supply only kitchens, or fully project managed kitchen installations. Our whole service is completely flexible to your needs and our Consultation & Design service is free. If you have any questions or would like to book your free design service, we’d love to hear from you.

If you would like someone to contact you simply leave your details below and we will call you back within 24 hours.

Close Menu
We use cookies on our website to give you the most relevant experience by remembering your preferences and repeat visits. Personal data/cookies will be used for personalization of ads. By clicking “Accept All”, you consent to the use of ALL the cookies. However, you may visit "Cookie Settings" to provide a controlled consent.
Cookie SettingsAccept All
Manage consent

This website uses cookies to improve your experience while you navigate through the website. Out of these, the cookies that are categorized as necessary are stored on your browser as they are essential for the working of basic functionalities of the website. We also use third-party cookies that help us analyze and understand how you use this website. These cookies will be stored in your browser only with your consent. You also have the option to opt-out of these cookies. But opting out of some of these cookies may affect your browsing experience.
Necessary Always Enabled
Necessary cookies are absolutely essential for the website to function properly. These cookies ensure basic functionalities and security features of the website, anonymously.
Functional
Functional cookies help to perform certain functionalities like sharing the content of the website on social media platforms, collect feedbacks, and other third-party features.
Performance
Performance cookies are used to understand and analyze the key performance indexes of the website which helps in delivering a better user experience for the visitors.
Analytics
Analytical cookies are used to understand how visitors interact with the website. These cookies help provide information on metrics the number of visitors, bounce rate, traffic source, etc.
Advertisement
Advertisement cookies are used to provide visitors with relevant ads and marketing campaigns. These cookies track visitors across websites and collect information to provide customized ads.
Others
Other uncategorized cookies are those that are being analyzed and have not been classified into a category as yet.
SAVE & ACCEPT